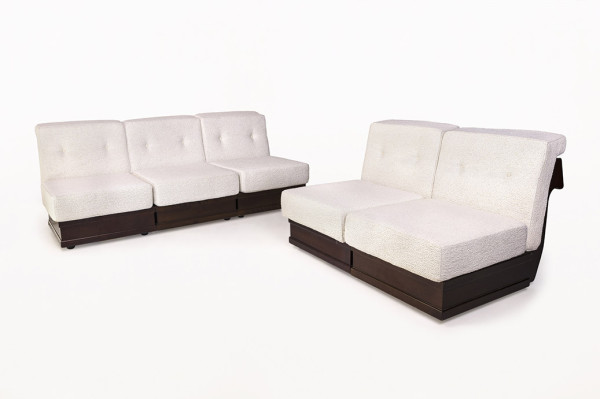 Luciano Frigerio Side Chairs, circa 1970, Italy

Set of Luciano Frigerio Side Chairs.
Made with mahogany.
Reupholstered.
It can be sold by pairs, each separately or whole set.
Circa 1970 , Italy.
Very good vintage condition.
Luciano Frigerio was born in Desio in 1928, where his Father Giovanni set up a small workshop of highly crafted cabinet making in 1889, Luciano attended the junior school at the Collegio Paola di Rosa in Desio, where he met his school friend Tommaso Giussani, who later became a Monsignor in his ecclesiastical career .This close friendship and reciprocal esteem for each other grew over the years and he was commissioned by the same Monsignor Giussani in 1982 to make two lecterns for Pope John XXIII, which can still be seen today in the Basilica di S. Pietro e Paolo in Roma, positioned under the altar of Bernini Bernini. Luciano Frigerio completed his technical and administrative studies at the Pio XI College, gaining his diploma of Accounting, while at the same time cultivating and combining his two great passions, which he had had since his adolescence of designing furniture and composing music.